Evander Holyfield is an American former professional boxer. He was born on October 19, 1962, in Atmore, Alabama, U.S. He is also Bernard Holyfield’s younger brother, a dancer and actor. Evander Holyfield competed between 1984 and 2011. He began boxing in the streets at a young age. His passion and talent allowed him to continue for 28 years. Hence, his nickname is “The Real Deal”.

In the late 1980s at cruiserweight and in the early 1990s at heavyweight, he held the uncontested title. Furthermore, Evander Holyfield is the only professional fighter to beat Muhammad Ali’s record of three heavyweight title wins. He won it four separate times. Firstly, he held the unified WBA, WBC, and IBF titles from 1990 to 1992. Secondly, he held the WBA and IBF titles from 1993 to 1994. Thirdly, the WBA title from 1996 to 1999 and the IBF title from 1997 to 1999. Lastly, he won the WBA title for a fourth time from 2000 to 2001. In 1996, he fought Mike Tyson and successfully defended his WBA championship. The Ring magazine dubbed it as the Fight and Upset of the Year.

Evander Holyfield retired in 2014. His professional record was 44 wins (29 via knockout), 10 defeats, and 2 draws. The International Boxing Hall of Fame accepted Holyfield as a member in 2017.

In contrast to his boxing success, his personal life was unstable.

Evander Holyfield was born on October 19, 1962, in Atmore, Alabama, U.S. He was born to Annie Laura Holyfield and Isom Coley. His mother was a chef for a restaurant. He was the youngest of his eight siblings. Furthermore, he had a different father than the others.

Eventually, when he was four, his family moved to Atlanta, Georgia. He was raised in the Bowen Homes Housing Projects. Not to mention, the place was plagued with crime. He graduated from Fulton High School in 1980.

Evander Holyfield was born on October 19, 1962, in Atmore, Alabama, U.S.  His parents are Isom Coley and Annie Laura Holyfield. He is a born-again Christian. Bernard Holyfield is his older brother.

Evander Holyfield also had a younger brother, Willie Holyfield. He died from a shot during a family feud. 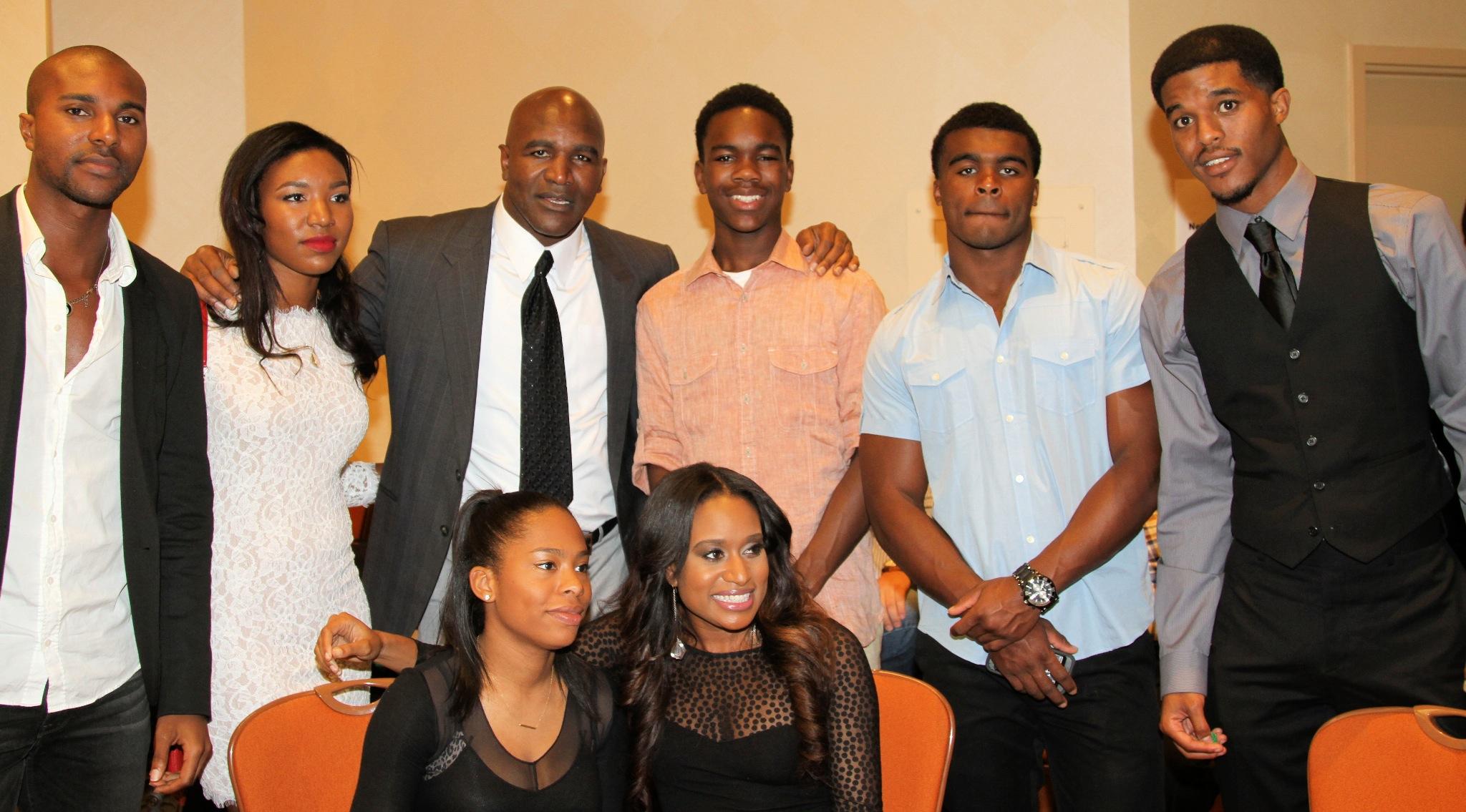 He is the father of 11 children by six different women. He has five daughters and six sons. Evan, one of his sons, went on to fight professionally like his father. Another son, Elijah, attended the University of Georgia. He also played football in college.

Although he earned US $513 million throughout his boxing career, he struggled financially due to money mismanagement. There were also suspicions of steroid usage against him, but he consistently denied them.

Just before that bank’s failure, Washington Mutual Bank published a court notice in June 2008. It was announced that Holyfield’s $10 million Atlanta mansion would be put up for auction. It occurred on July 1 as a result of foreclosure. The mansion was eventually purchased by rapper Rick Ross.

Toi Irvin, the mother of his then 10-year-old son, filed a lawsuit against him. It was for non-payment of two months’ child support. He paid $3,000 per month for this child.

Holyfield was unable to manage his money, which was close to $250 million dollars. As a result, he may now be forced to sell his most prized possession: one of his cars.

After retiring, he went bankrupt and is now worth $1 million.

Washington Mutual Bank issued a court notice in June 2008, just before the bank failed. It was revealed that Holyfield’s $10 million Atlanta house will be auctioned off. It happened on July 1, 2008 due to foreclosure. Rick Ross, a rapper, subsequently bought the home.

“Evander Holyfield Highway” is the name of the road on which the house stands. The house is very big. It is 44,234 square feet in size. It features 109 rooms, including a 135-seat theatre, a bowling alley, and a dining room for 100 people.

Evander is a rival of Mike Tyson. This dispute drove him to the height of his career. Tyson bit and tore off a part of his ear during a heavyweight title match in Las Vegas on June 28, 1997. Tyson lost his boxing licence. He also had to pay a fine of $3 million.

Since he lost the heavyweight title to Moorer in April 1994, Holyfield’s heart has been a source of concern. He was diagnosed with a non- compliant left ventricle, which causes significant exhaustion. He also had a tiny hole between his heart’s upper chambers.

Later, he claimed to have an illness that affects the lungs and heart. After that, he claimed to have been treated by a faith healer. Since then, testing has revealed no evidence of any cardiac illness. All in all, he has an unusual EKG result, which is common in men of his age.

On February 28, 2007, Holyfield was allegedly connected to Applied Pharmacy Services. It was an Alabama pharmacy. It was under investigation for selling banned steroids and human growth hormone (HGH) to athletes. Although, he denies ever taking performance-enhancing drugs.

Holyfield’s name does not appear in any of the law enforcement papers analysed. However, a patient named “Evan Fields” drew the attention of scientists. Fields was born on October 19, 1962, the same day as Holyfield. The listed address for “Fields” was 794 Evander, Fairfield, Ga. 30213. Holyfield has a very similar address. When the phone number associated with the “Fields” prescription was dialled, Holyfield answered.

On March 10, 2007, Holyfield said publicly that he would conduct his own inquiry into the steroid allegations. It was an attempt to clear his name.

In September 2007, Holyfield’s name was again linked to HGH. It was after a raid on Signature Pharmacy in Orlando, Florida. The pharmacy was being investigated for illegally selling steroids and HGH to numerous elite sportsmen.

He lost the first fight of his career on November 13, 1992. It was against Riddick Bowe. Bowe became the most difficult opponent to him. Later on November 6, 1993, they fought again. Holyfield won.

Due to a fan who landed in the ring using a parachute, the rematch battle was called “Fan Man fight“. Riddick Bowe won the third and final battle, on November 4, 1995. It was known as the final chapter.

He was defeated by Michael Moore in April 1994. Moore was a former WBO light heavyweight champion. Holyfield declared his retirement following the bout. As a matter of fact, he had a heart condition with which he was diagnosed. He did, however, come out of retirement with a victory over Ray Mercer.

His biggest fight was against Lennox Lewis, in 1999. The first bout was a draw. Lennox Lewis defeated Holyfield in the rematch.

Holyfield faced John Ruiz in the ring for the heavyweight championship in 2000. Evander Holyfield won by unanimous decision. Later, they fought again in March 2001. John Ruiz took a 12-round decision over Holyfield. Lastly, the third encounter between them ended in a tie.

He began 2002 with a victory over Hasim Rahman. Following that, he lost three straight fights to Chris Byrd, James Toney, and Larry Donald. 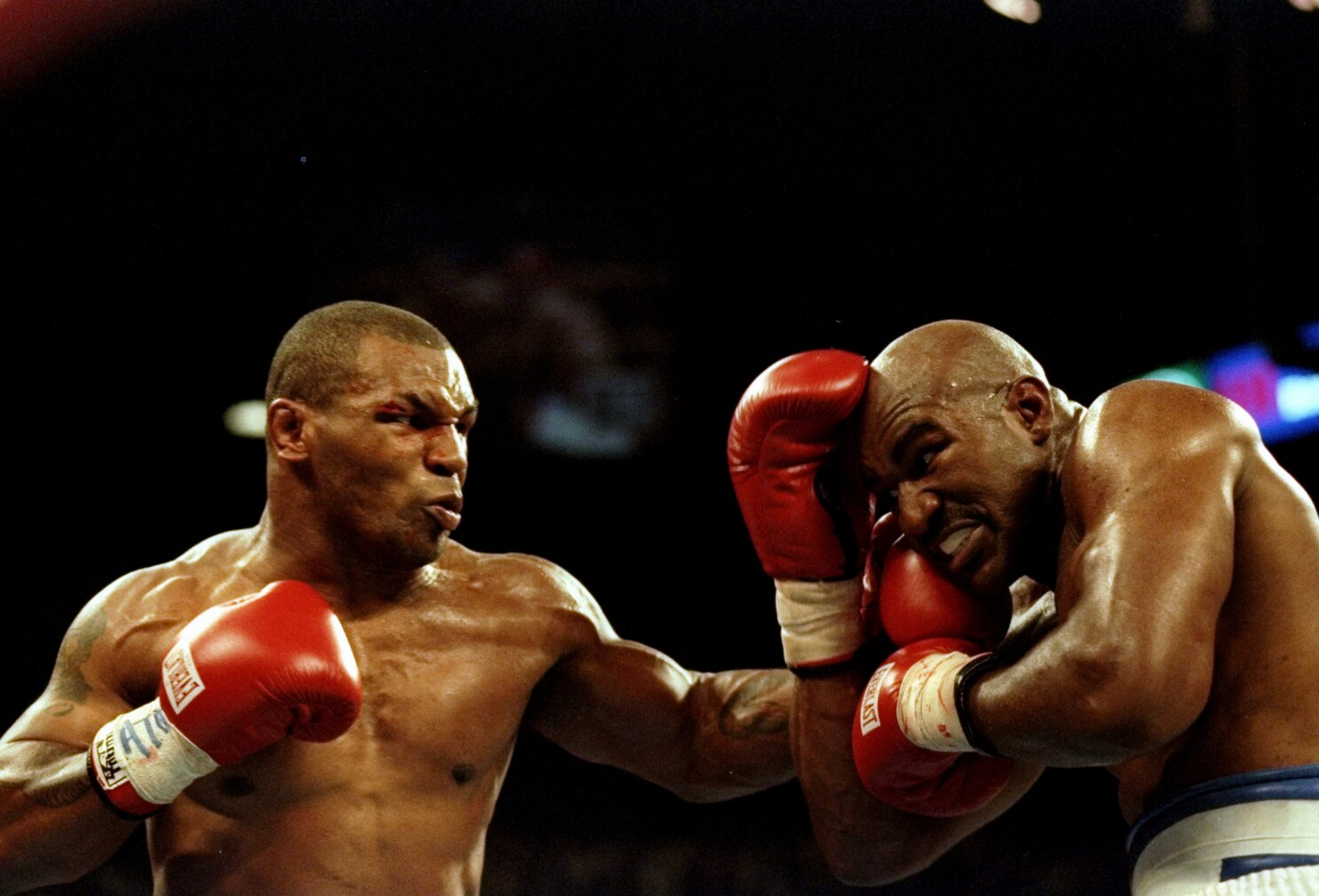 He lost the exhibition fight against Vitor Belfort on September 11, 2021, by a knockout. The match was billed as “No Holds Barred”.

Evander Holyfield had 57 fights, 44 wins and 10 losses. He won 29 times and lost 2 times by knockout. He also has 14 wins and 8 losses by decision. By disqualification he has only 1 win. Lastly, he has 2 wins by draws and 1 win by no contests.

No, Tyson never defeated Evander Holyfield. In brief, in the rematch, Tyson bit a portion of Holyfield’s ear. It was a very famous and controversial match. It also resulted in a historic rivalry between the two parties.

Presently, Evander Holyfield and Mike Tyson are not friends. Previously, they got along well. After their historic rivalry began when Tyson bit Holyfield’s ear, they were not quite fond of each other.

How much is Evander Holyfield worth right now?

He is currently worth $1 million dollars.

How many fights did Evander Holyfield lose?

He lost 10 fights in his professional boxing career.

Who is the greatest boxer of all time?

Muhammad Ali is considered to be the greatest boxer of all times.

Who has the best boxing record ever?

Rocky Marciano has the best boxing record. He has 42 wins surprisingly, with no defeats in his entire boxing career.